Sign in
Welcome! Log into your account
Forgot your password? Get help
Password recovery
Recover your password
A password will be e-mailed to you.
Online Technology Calculator
Home Bollywood Top 10 Bollywood Movies based on Cops
India is the largest producer of films. Policemen have made for some of the most memorable protagonists of Indian cinema. Movienasha brings out the Bollywood movies based on Cops. The numbers here are in any random order and do not suggest a level of greatness in the movie. Please leave a comment if you think differently and have something in mind which you want me to notice your comments are most welcome! Here is the list below

Top 10 Bollywood movies based on cops

Sarfarosh is one of my favorite Bollywood movies based on Cops directed by John Mathew Matthan. It was released in 1999 starring Naseeruddin Shah, Sonali Bendre, Aamir Khan, Mukesh Rishi, Nawazuddin Siddiqui and Upasana Singh. After his brother is killed and father severely injured by terrorists, a young medical student quits his studies to join the Indian Police Service to wipe out the terrorists. This film deals  with the fight against cross-border terrorism.

Zanjeer is one of the best Bollywood movies based on police officer directed and produced by Prakash Mehra. It was released in 1973 and stars Amitabh Bachchan, Jaya Bhaduri, Pran, Om Prakash, Ram Sethi, Ajit Khan and Bindu. The movie changed the trend from romantic films to action films and pioneered Amitabh’s new image of a brooding but explosive person who fights back when cornered.He was now known as The Angry Young Man.The story revolves around Vijay, an honest Police Officer. Jailed for 6 months on false charges and trapped by gang leader Tejas. when Vijay is released from Jail, he plans to take revenge. The film becomes the Super Hit at the box office. The plot line has many similarities to the Hollywood movie Death Rides a Horse.

Singham is one of the foremost Bollywood movies based on Cops which is directed by Rohit Shetty. It was released in 2011 starring Ajay Devgan, Kajal Aggarwal, Prakash Raj, Sonali Kulkarni, Ashok Saraf and Sachin Khedekar. Ajay Devgan gives us a sizzling performance as Bajirao Singham in this movie. A humiliated gangster uses his influence and goon power to terrorize a newly transferred police officer. It is a remake of the 2010 Tamil blockbuster Singham featuring Suriya and Anushka Shetty. It turned out to be a blockbuster at the box office.

Wanted is an action thriller movie directed by Prabhu Deva and produced by Boney Kapoor and Matt Zemlin. It was released in 2009 starring Salman Khan, Ayesha Takia, Parkash Raj and Vinod Khanna. It is a remake of Tamil film Pokiri starring Mahesh Babu and Illeana D’cruz. This movie broke many records at the box office. Wanted was also the second highest-grossing Bollywood film of the  year in 2009. Radha is a truthless gangster who will kill anyone for money. He is attracted towards Jhanvi, a middle-class girl, who does not approve of his work and wants him to change.

Dabangg is one of my most-liked Indian Hindi action masala movies based on Cops directed by Abhinav Kashyap and produced by Arbaaz Khan under the Arbaaz Khan Productions. It was released in 2010 starring Salman Khan, Arbaaz Khan, Sonakshi Sinha, Sonu Sood, Vinod Khanna, Dimple Kapadia, and Anupam Kher. The film marks the debut of Sonakshi Sinha as an actress. Malaika Arora Khan appears in the item number “Munni Badnaam Hui”. A corrupt police officer faces challenges from his family, gangsters, and politicians. It opened to generally positive reviews and broke several box-office records upon release. It became one of the  highest grossing Bollywood movies of 2010. 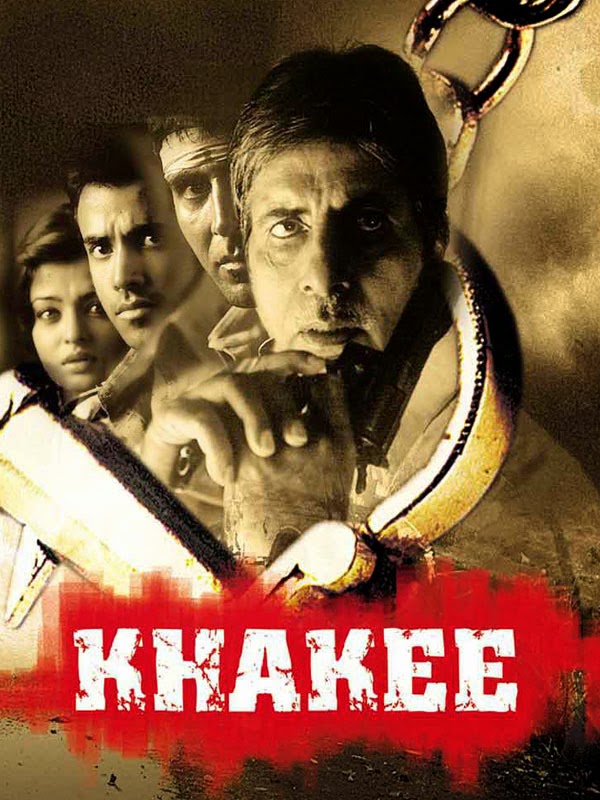 Khakee (English: The Brown Uniform) is also one of the top Bollywood movies directed by Rajkumar Santoshi and produced by Keshu Ramsay. It was released in 2004 starring Amitabh Bachchan, Akshay Kumar, Ajay Devgan, Aishwarya Rai, Tusshar Kapoor, Atul Kulkarni and Jaya Pradha. The video tells the story of an Indian police team who set out on a dangerous mission to transfer an accused Pakistani spy from a remote town in Maharashtra to Mumbai. The film became one of the highest-grossing films of the year. It is regarded as one of Santoshi’s best films till date.

Mardaani is one of the Bollywood movies based on female cop whose interest in the case of a kidnapped teenage girl leads her to uncover secrets of human trafficking by the Indian mafia. It was released in 2014 and directed by Pradeep Sarkar and produced by Aditya Chopra starring Rani Mukerji, Tahir Raj Bhasin and Jisshu Sengupta. The film has been given tax-free status in Madhya Pradesh. This was also followed by Uttar Pradesh and Maharashtra giving the film tax-free status. 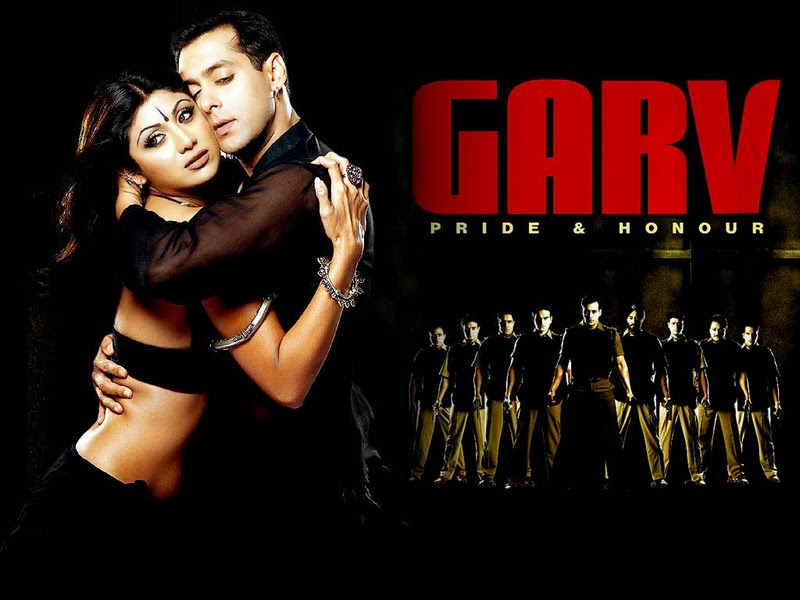 Garv: Pride and Honour is one of the best Bollywood movies based on cops which is directed by Puneet Issar and produced by Sunil Mehta. It was released in 2004 featuring Salman Khan, Shilpa Shetty, Arbaaz Khan and Amrish Puri. The film was the first hit by Salman Khan in 2004. Garv is the story of three brave and honest cops: Samar Singh, Arjun Ranawat, and Hyder Ali Khan.Samar wants the state to be crime-free. At the end, Arjun, in a fit of anger, kills the rapists and surrenders himself. He wants to be awarded capital punishment. 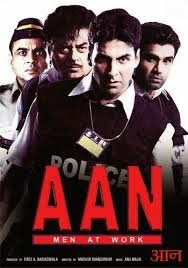 Aan: Men at Work is a movie directed by Madhur Bhandarkar.It was released in 2004 starring Akshay Kumar, Jackie Shroff, Sunil Shetty, Shatrughan Sinha, Raveena Tandon, Lara Dutta, Irrfan Khan. The movie is about the life of a police officer fighting crime constantly.A superb portrayal of how politics and business heads try and manipulate the police force and lets the Mumbai mafia get away with their illegal activities.Crime is at its highest peak in Mumbai with it split in three ways. The crime rate rises with more smuggling, trading and illegal activities soaring. Meanwhile, CBI is constantly working to stop this. 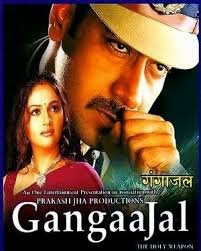 Gangajal is a movie based on a true incident directed, produced, and screenplay by Prakash Jha. It was released in 2003 starring Ajay Devgan, Gracy Singh and Mukesh Tiwari. The video as a sidetrack also mentions the blinding incident in Bhagalpur.Gangaajal was a hit at the Indian box-office. Ajay Devgan played a tough cop out to cleanse a small town in Bihar run by goons and politicians. The language of storytelling was a highly potent mix of Govind Nihalani’s Ardh Satya and Prakash Mehra’s Zanjeer.

Jai Gangaajal ((Devnagari: जय गंगा-जल English: Ganges’ Waters or literally means Hail Holy Waters) is an upcoming movie directed, produced, story and screenplay by Prakash Jha. The movie is all set to rock cinemas on 4 March 2016 starring Priyanka Chopra and Prakash Jha in the lead role. The movie was made under the budget of ₹10 crore. The movie was shot in Bhopal. Priyanka Chopra began shooting for the movie in June 2015. Priyanka gives powerful dialogues in the movie. I thought her character looked close to real cops, maybe a bit demure for Bollywood but realistic in a Prakash Jha way. What Priyanka did in the movie was extremely natural and convincing. She looks tough yet graceful. No actress could’ve pulled it off the way she did. No offense to anyone, that is just my opinion. Check out the trailer first and then give your personal opinion – Jai Gangaajal.

Talaash: The Answer Lies Within is a psychological thriller+ suspense movie directed by Reema Kagti and produced by Farhan Akhtar, Aamir Khan, and Ritesh Sidwani. The movie was released on 30 November 2012 starring Aamir Khan, Kareena Kapoor Khan, Rani Mukherji, Nawazuddin Siddiqui and Rajkummar Rao in the lead role. Talaash is an outstanding movie. A taut psychological thriller that keeps you guessing till the end, it leaves you spellbound, leaves you mesmerized, leaves you with an exclamation, and leaves you with an exclamation, “Wow!”. An absolute must-watch for all movie buffs. This movie is so cool that it just blows you away in some parts, like your trying to hide behind the seat in front of your row, makes you jump out of your seat a lot… It is one of the best bollywood movies which are based on cops.

Interior Design Tips to Boost the Value of Your Home

October 24, 2019 0
Having decided to sell your home, you naturally want to do everything you can to maximize the...
Read more

5 Slot Machine Strategies to Increase Your Chances of Winning

September 16, 2020 0
There are more slot machines in Las Vegas casinos than any other device. Not only are they...
Read more

Actionable Advice To Improve Your Business

March 22, 2020 0
When someone opens up a business. It doesn't matter what type of business it is or even...
Read more

April 5, 2021 0
Whether it's your phone, tab, or PC, cache files and unwanted data can slow it down from...
Read more
Contact us: xomba@freeemail.biz